This is going to be a less popular opinion than most, and I usually don’t like taking a “superior position” to mainstream reviews, but Spider-Man: Homecoming, in its perfectly safe, Marvel-approved, inoffensive little package, feels much closer to a big budget special series of Agents of SHIELD than an actual addition to the Cinematic Universe. There. I said it.

In fact, in this new take, Spidey feels completely relegated to the JV squad throughout and, for an OG fan from back in the day, this is enormously disappointing. There are major issues with both of the previous film incarnations, but one thing that they both did very well — that I now realize was taken for granted — is depict that sense of independence, ingenuity, and self-reliance Peter Parker has always had in the face of adversity,  and in Homecoming all those things are removed. Instead, this is once again Tony Stark’s world, and we’re all just living in it. For Spider-Man to practically require permission and approval from Iron Man to be a superhero was massively frustrating.

That aside, Tom Holland is more than capable in this role and a real joy to watch on screen. Still… (and I get they are trying to reboot the character from scratch), but this literal Marvel fanboy… this bumbling, insecure goofball… this ain’t my Spider-Man. 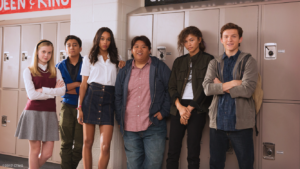 Holy Self-Referential Awareness, Batman, this movie is meta. Like. So meta. There are shots at all kinds of things from the previous Spider-Man movies to the unusual new hotness of Aunt May, to Ferris Bueller (?!) to Donald Glover being…. weird Donald Glover. It’s self-aware to the point that I was starting to worry the post-credits sequence would just be a camera view from inside the theater just behind our heads. But this also allows the filmmakers and all six of the credited screenwriters to really have fun with the material which translates really well to the audience Marvel is aiming for: the casual summer blockbuster crowd. More devoted fans of the franchise (i.e. nerds and geeks and me) just might call out Homecoming for being a big glowing pastiche of what has worked 17 or so times before, minus the stakes.

To reference it again, the unfairly maligned Agents of SHIELD has plotlines that easily outmatch this film in terms of scale and scope, and the final battle that takes place could have easily in fact been lifted from the small screen. To put a finer point on it, nothing that happens in Spider-Man: Homecoming was an experience unique to the character in particular. To put an even finer point on it, any of the B-List heroes in the Marvel oeuvre could have substituted for Spider-Man at any point in this story and it wouldn’t have mattered. In fact, his actual powers, when not absent entirely, are occasionally inadequate or mocked throughout the movie which brings me to another complaint… 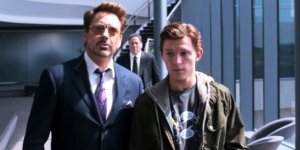 At some point RDJ is going to bow out of the role, and although I will certainly miss the actor’s undeniable charm and wit, my goodness, is Iron Man becoming the deus ex machina of the MCU. He really has turned into the Marvel equivalent of Superman crossed with a Swiss Army Knife where the question becomes, “Why bother having any other superheroes show up, Tony Stark probably has an Iron Man suit that can handle it.” His suit is now some combination of Inspector Gadget and the original ’66 Batman utility belt which, luckily, has shark-repellent spray equipped because – of course it does. When there are no restrictions on a character’s abilities, there is no sense of suspense, no tension. Iron Man has become the screenwriter’s foil, a lazy way to resolve any situation, and making Peter Parker basically dependent on one of those suits to do everything is tragic beyond description. This also presents the opportunity to make the same AI jokes all over again with a female version of JARVIS, this time voiced by Jennifer Connelly (who is, in real life, married to Paul Bettany who voiced the actual JARVIS and is now Vision, because META). 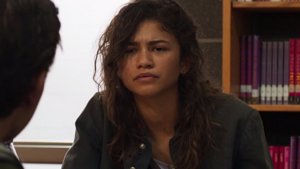 Okay, all kvetching aside, where Spider-Man: Homecoming undeniably succeeds is off the clock. The high school setting, this time around with convincing teenage actors as opposed to 30 year old men wearing backpacks, is as much fun as you’re going to have at the theater this summer. The whole cast is a joy, even the bully Flash Thompson, now Guatemalan instead of white and Thor-like, is kind of funny while being a jerk to Peter.

A particular surprise was one of my primary objections when the film’s cast was first announced,  and it’s a complaint that got me in a lot of trouble with some female friends on social media. Up until the announcement of her role, I had never heard of nor did I know what a ‘Zendaya’ was, and when I looked her up I recoiled in disbelief. I understand that she is a talented performer and actress, that I get, but my first impression was that she looked like someone who had taken a Bratz doll and magically brought it to life. This is not a shot at her to be insulting, she’s undeniably beautiful but also, in my opinion, unrealistically beautiful. She’s a product of the fashion world, which is a world that I have no place in or love of, and I could not comprehend her existing alongside Peter Parker who is destined to be a lowly newspaper photographer struggling to make ends meet. (Lo the wrath I took on Facebook for objecting to unrealistic beauty standards.) However, I will freely admit to judging a book by its cover, unfairly so, because as it turns out, Zendaya has some comedic timing magic. She was interesting and weird, if in a Disney Channel kind of way, and I look forward to whatever direction they are going with her, even if we have to wait for the sequel to find out what that is going to be.

In other news, Michael Keaton is a national treasure. Seriously, just… be in more movies, dude.

Is Spider-Man: Homecoming the Spider-Man movie we’ve been waiting for? The one we deserve? The redeemer of the franchise and the character? Sure, if you want it to be. I’ll be waiting on the rest of the movies to find out. As I’ve said before, this is not my Spider-Man… but it’s not really supposed to be. The Web-Head I looked up to was closer to the kind of man that I wanted to be like: funny, independent, maybe a little bit lonely, but certain of his responsibility. And seeing this nascent version of that man is okay. I forget that it’s not always my turn.

Hopefully, the darker, more mature themes that made the Wallcrawler so compelling will find their way back into this version someday, but until then this will do just fine. In fact, the movie sincerely is an absolute blast from start to finish and is probably the funniest film in the entire canon. One can only hope that Kevin Feige and company stop painting by numbers at some point and let these  films grow up.

Oh, and a sidenote: One thing that kept nagging at me from the beginning was the quaint, solitary SONY logo that appears before the opening sequence of the movie. After the scene plays out the MARVEL fanfare begins with its massive logo and hero cutaways, and a jaunty version of the 80s Spider-Man theme plays — and you realize who is really in charge. These movies can continue to be a lot of fun without saying anything or taking any chances and if that’s what Marvel wants to keep doing, that’s certainly within their considerable influence and power. — And although they left the man out with only so much as a passing mention, let’s hope Marvel remembers those wise words, “With great power, comes great responsibility.” Keeping my fingers crossed.