The original Star Wars trilogy looms over the new Star Wars trilogy in complicated ways. Obviously, the original trilogy’s immense and devoted fanbase and it’s unfathomable cultural footprint put a lot of pressure on the filmmakers of the new trilogy to do it justice, but its legacy reverberates within the story of the new trilogy as well. And one of the most fascinating aspects of this new trilogy is how the relationship the characters have with the events of 30 years’ prior becomes instant meta-text (or, in the case of The Last Jedi, text-text) for both the audience and the filmmakers themselves.

In The Force Awakens, there are obvious parallels between the audience’s presumed regard for the original trilogy and the characters’ regard for the events of the original trilogy: legendary stories beloved by many and passed down through generations. Luke is a legendary hero for Rey as much as he is for…well, us. The plot line where a hero of the old story teams up with a hero of the new story (vis-à-vis Han Solo and Rey) to metaphorically pass the torch is underscored by the meta-text that The Force Awakens was co-written by Lawrence Kasdan, writer of Empire Strikes Back and Return of the Jedi, and J.J. Abrams, who will now similarly be responsible for two-thirds of the new trilogy. Another torch passed.

At one point in The Last Jedi (relax: it’s in the trailer), Kylo Ren growls “Let the past die. Kill it.” The barely concealed meta-text is clear: Star Wars is not beholden to the old guard. It can acknowledge and honor the old trilogy (as it has) but still grow to become something new, because fresh blood is in charge now.

In the spirit of acknowledging and honoring the old trilogy, the barebones structure of Last Jedi bears resemblance to its counterpart in the original trilogy, The Empire Strikes Back. It’s not to the extent of the much-discussed similarities between The Force Awakens and A New Hope, but both Last Jedi and Empire see two of the three leads in an extended chase and the third lead elsewhere getting trained by a master, until eventually their stories collide. Despite these barebones similarities, Luke Skywalker’s ominous warning from the trailer rings true: “This isn’t going to go the way you think.”

I loved most things about The Force Awakens, but one thing I never internalized or bothered to put into words (until screenwriters John Gary and Brian Duffield succinctly did so on Twitter last week) was how quickly and effortlessly Rey, Finn, and Poe became pop culture icons almost instantaneously. The first entry of the new trilogy did such an impeccable job defining their characters, showing us their desires and fears, giving us a sense of who they are fundamentally, that they came out of The Force Awakens fully-formed. I feel like I know these characters as well as I know any in the Star Wars canon, despite only spending one — now two — movies with them.

The Last Jedi succeeds because it understands that watching these characters grow is the great pleasure of Star Wars (and having flat, uninteresting characters was the great failure of the prequels more so than Jar-Jar or midichlorians).

The characters all want different things and the actions they take are a direct result of the different things they want: Poe wants to defeat the First Order; Finn wants to keep Rey safe; Rey wants to learn who she really is and “find her place in all this” (as she says in the trailer). I’m handcuffing myself from discussing specific plot elements of The Last Jedi, but here’s a brief anecdote: Oscar-winning screenwriter Michael Arndt — who wrote an early draft of The Force Awakens before Kasdan and Abrams — recorded a lovely breakdown of how to set a story in motion for the bonus features of Toy Story 3 (which he also wrote). In it, he describes how a character needs a fundamental trait/desire but also a fundamental flaw, which is (poetically) usually a consequence or outgrowth of their fundamental trait/desire (“a good thing that’s just been taken too far”). Given the fundamental traits/desires of the main players, keep an eye out in The Last Jedi for how they manifest themselves as the characters’ weakness/fatal flaw, in all three cases.

The movie’s structure is cleanly delineated by locations, much like how A New Hope is broken down into Act I Tatooine, Act II Death Star, Act III Final Space Battle. However, as plans are made and story expectations are established for each of these sections (a la “Get to Alderaan”, “Find/rescue Leia”, “Blow up the Death Star” in A New Hope), writer/director Rian Johnson has plenty of surprises up his sleeve, on both a plot and character level (“This isn’t going to go the way you think”). Even Luke Skywalker and Leia Organa, who’ve developed and grown and become intimately familiar to us over the course of forty years and five movies, still have the ability to surprise us, to say nothing of the new blood. 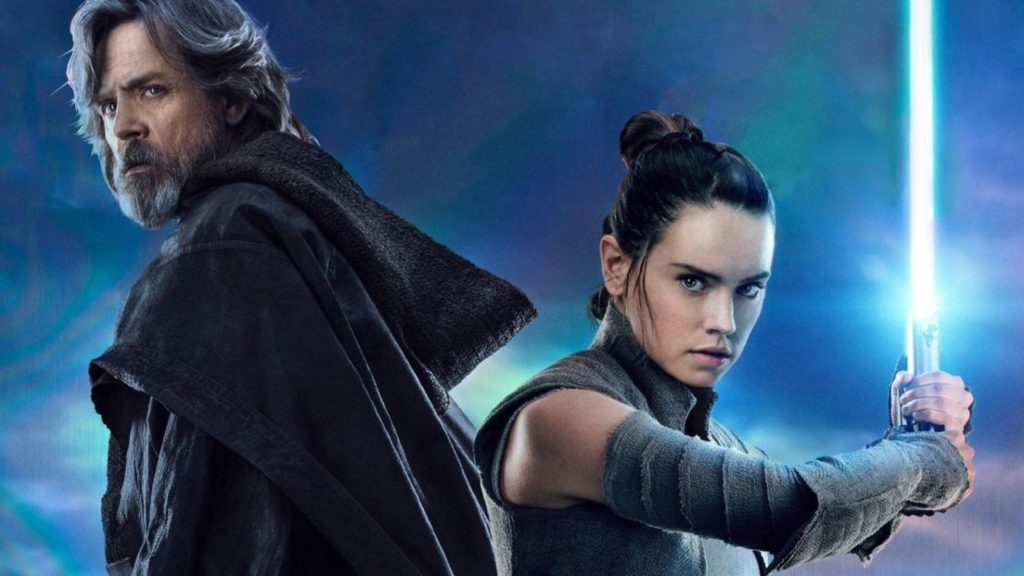 The second installment in what we already know will be a trilogy has the difficult task of upping the stakes, continuing the characters along in their arcs (but not too much), telling a complete story in its own right (but not too complete), and setting the stage for a final, climactic installment. For this reason, I sympathize with those audience members who felt The Last Jedi supposedly just spins its wheels, but at the same time, I look at that list of things the movie had to accomplish: check, check, check, and check. I keep coming back to Empire, which began with the Rebels losing a battle on Hoth and ended with the Rebels still very much with their backs against the wall. While it’s now considered the best in the franchise, I’m sure that very much felt like wheel-spinning in 1980. Nothing was really solved, but much, much, much was revealed (and teased), including one of the most famous character reveals in film history. At the end of The Last Jedi, as expected, nothing is solved, but much has been revealed, in delightfully thrilling, surprising, and at times awe-inspiring fashion.

As hinted by their brief encounter in The Force Awakens, a strange, (as yet) inexplicable connection exists between Kylo Ren and Rey and is further explored in Last Jedi. Both have made their choices on which side of the force they fall on, but both feel seduced by the opposite side, in a lovely twist on Luke’s seduction by the Dark Side in the original trilogy (we already know the Dark Side is seductive, but evidently the light is as well). It’s a clear acknowledgement of the old trilogy, but the emphasis is on the pair forming their own path. As meta-text becomes text, they aren’t beholden to the old guard of Star Wars either. Star Wars doesn’t belong to Luke and Vader or to George Lucas or to the previous generation; it belongs to all of us.