Jacksonville, FL –  As Cities Burn stopped at the intimate venue Jack Rabbit last Friday evening, and they brought along friends for an evening filled with grooving tunes.

Our local opener for the night was Conjure, a grunge/alternative 4-piece rock band from Jacksonville. Their high enthusiasm and home-town crowd brought a lot of energy to start off the evening. Most memorable was their drummer who also was a vocalist and showed such a high lung capacity, it was unbelievable! They played many new songs off their new EP Reflections, including a song about aliens that was out of this world. This is a local band to keep your eyes on and keep on your radar. 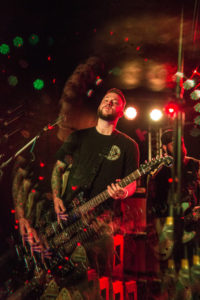 Following was the up and coming indie/alternative, Tigerwine. This 4-piece band from Colorado Springs brought rocking beats, emotion filled lyrics, and a high energy performance that filled this small yet quant venue. They played many grooving tunes of their recently released LP Die with Your Tongue Out and older hits such as “Crucial Tone.” Their thrasher beats from the drummer had heads banging and the crowd moving for their entire set. Tigerwine is certainly for those who are fans of Movements and The Least of These. Do not sleep on this band!

Our last opener for the evening was My Epic, a rock and roll Christian band from Fredericksburg, Virginia. Their soulful lyrics and passionate performance brought multiple fans to tears as they sang along to each and every word. They played many crowd favorites as well as new songs from their recently released EP Ultraviolet, such as “Of Wilderness.” They are currently on a tour with Silent Planet, and I would highly recommend you check them out if they come through your town! 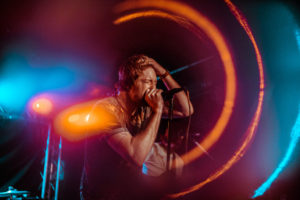 Lastly, we had our headliner for the evening, As Cities Burn. This 5-piece rock band from Nashville have been tearing up the stage since 2002 and you could certainly feel that through their fans’ energy. The crowd moved and jammed for the 16 song setlist with no signs of slowing down on either end. The intimate setting was truly a treat for long time fans to get up and close while shouting the lyrics back at the beloved band. This was a show for the books and will not be forgotten any time soon!