CHARLOTTE, NC — Veteran ska band and part-time TV superheroes, The Aquabats, brought their lively “Holy Guacamole” tour to Charlotte on Monday night to a diverse and ecstatic crowd. The band brought out a following of adults who grew up listening to the group during a ska revival in the 90s, and their kids who loved their TV series, which aired for three seasons earlier this decade. As the venue begin to fill in before the show, the room was crawling with people dressed in Aquabats gear, including everything from the standard T-shirts and beanie caps to Aquabats logo pajamas and replicas of the bands superhero stage uniforms. 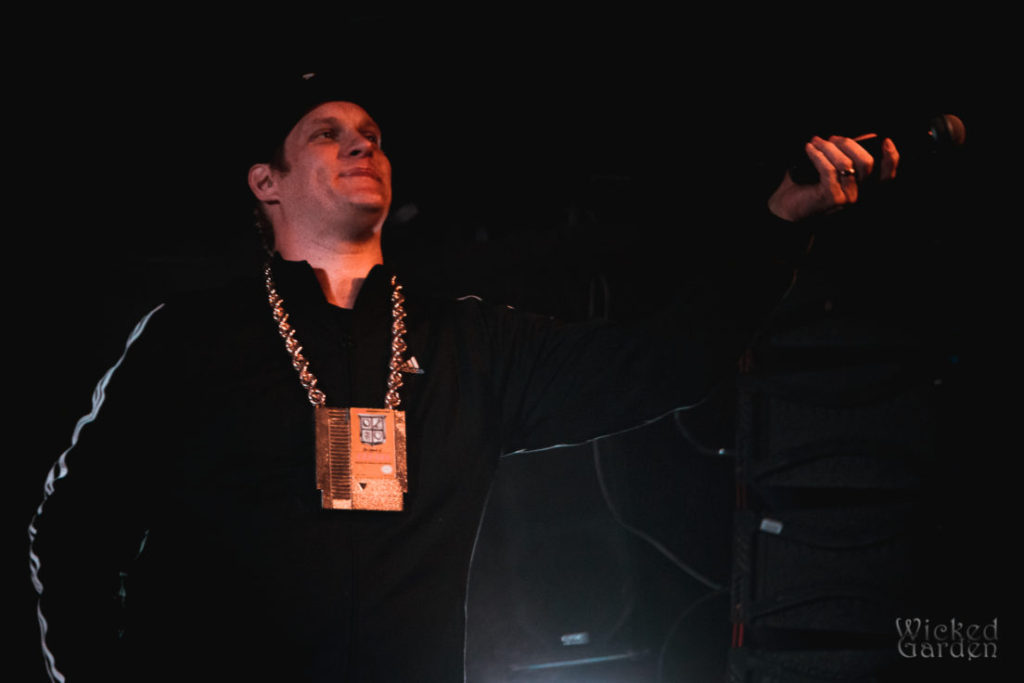 The evening kicked off with a short set by MC Lars. The rapper performed by himself in front of a backdrop covering the stage with just his name on it, to backing tracks of fan favorites, including “Download This Song,“ and “Hot Topic Is Not Punk Rock,” the latter of which could be seen on T-shirts on audience members scattered throughout the venue. A good portion of the crowd knew his music well enough to sing along with several of his songs, including one lucky seven-year-old, who was called on stage to rap along with the final song, “Mr. Raven.“

The fun continued with 45 minutes of quirky hip-hop / dance tunes by the energetic duo, Koo Koo Kanga Roo. The pair hit the stage literally running, with an energy that could easily double as a workout video. They ran through a dozen songs, with audience participation at every opportunity. They performed “Cat Party” in the middle of the crowd, as the room jumped in unison to the booming subwoofers and yelling along to the chorus. Topics of their songs ranged from unicorns to unibrows as they turned the venue into a house party. 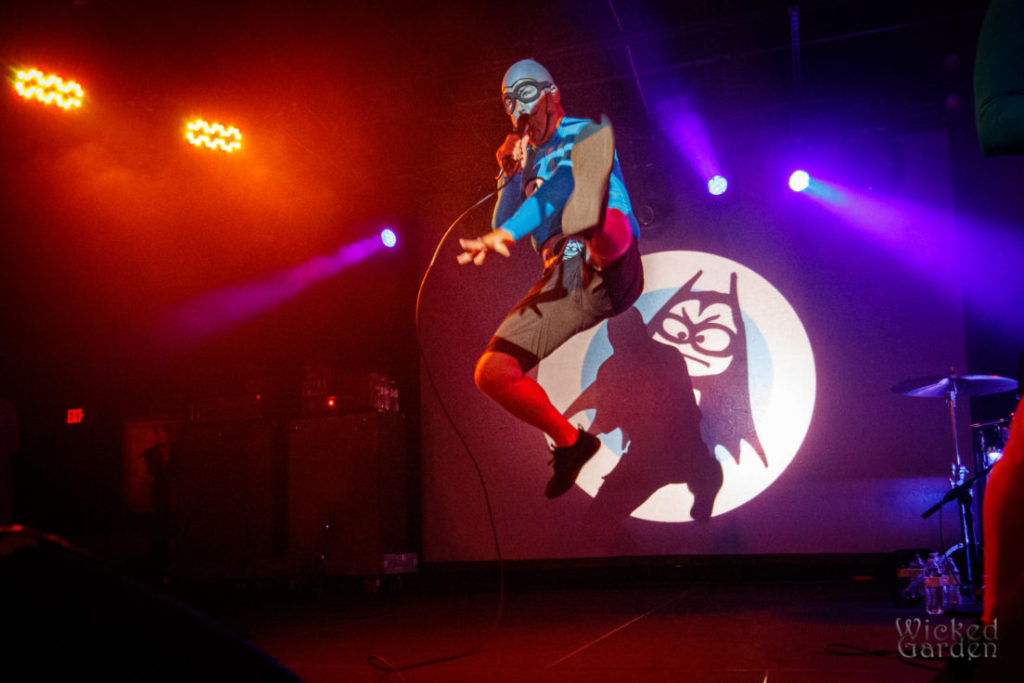 Led by The MC Bat Commander on vocals, The Aquabats took the party up a notch the second they hit the stage. Opening with “The Shark Fighter!,” they tossed a pair of life-size inflatable sharks into the crowd, while bouncing around the stage with the fervor of someone who was actually fighting a shark. Guitarist Eagle “Bones” Falconhawk and bassist Crash McLarson joined the Commander in front of a large projection screen, playing images and animations related to the songs throughout the show. They barely took time for a breath before kicking into “Cat With Two Heads” and “Martian Girl,” which go back to the first two albums the band released back in the late 90s.

The Aquabats, always known for their quirky sense of humor and style, played in the same matching costumes and masks as they wore in “The Aquabats! Super Show!” Throughout this evening, they played several songs from the show, starting with the “Super Show Theme Song,” which brought on the first of two enemies the band would save the audience from during the show. Fans of all ages knew and loved the songs and references from the show, particularly “Doing Science,” and “Burger Rain,” driven by keyboardist Jimmy the Robot. 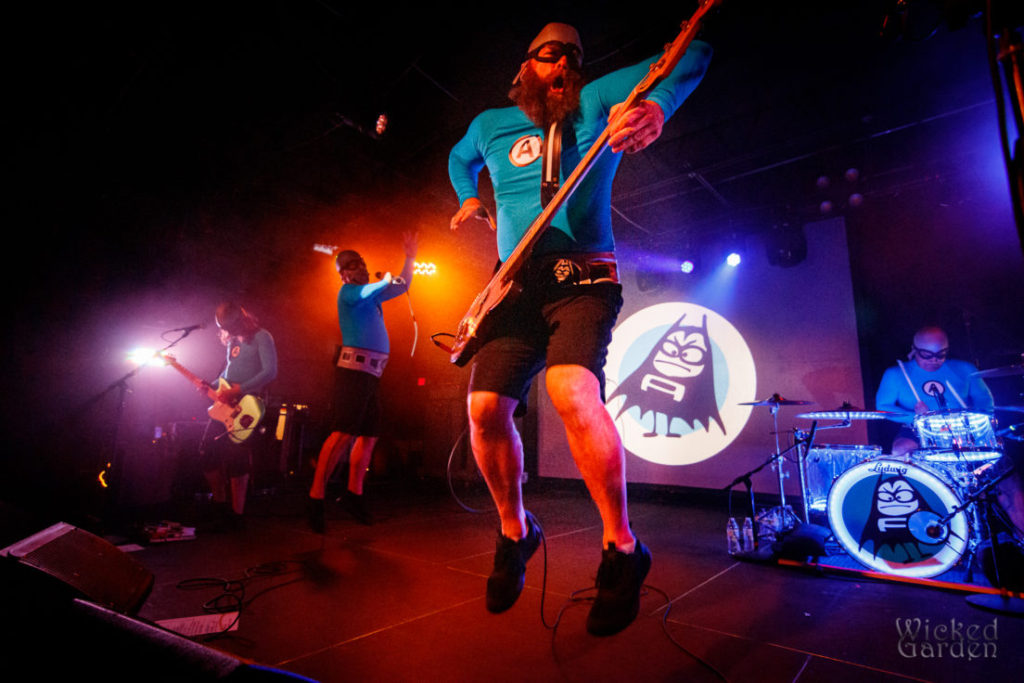 The show was full of surprises, including bringing a seven year-old up from the audience to crowd surf on a large inflatable pizza slice during “Pizza Day” and drummer Ricky Fitness taking vocals for a cover of The Cars’ “Just What I Needed.” For one last twist, the group filled the stage with kids from the audience to dance with them and throw beach balls to their final song, “Pool Party.” 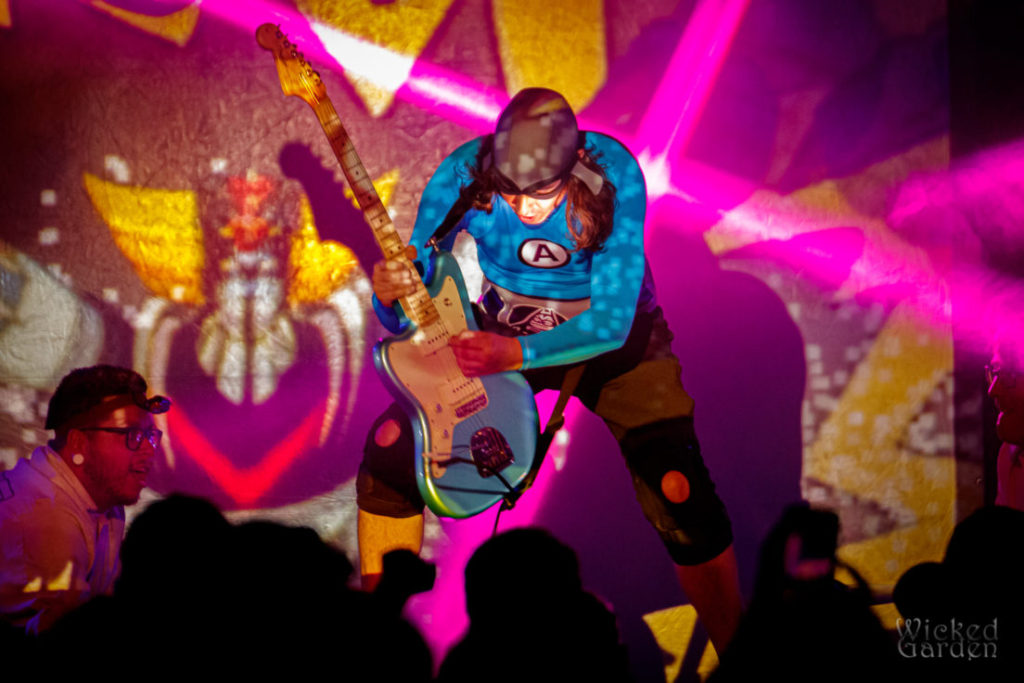 Catch the Aquabats on tour, and watch their YouTube channel for new episodes of The Aquabats! Super Show, as the result of a recent Kickstarter campaign to produce more of their popular show.