Cincinnati, OH – When bands tour together as co-headliners, there’s typically a synergy of musical styles. Touring together makes sense – it brings fans of each band together, exposing them to more music of a similar genre.  From a concert perspective, though, the formula is always the same.  There’s an opening act, then one of the co-headliners performs, and then the other co-headliner performs.  It’s predictable, but it works.

The Band of Brothers Road Show features Boston’s American Authors and Los Angeles’ Magic Giant, opposite coasts but complementary music.  But that’s where the co-headliner formula ended… a lot of thought went into developing this tour, and it brilliantly blew the rest of the formula to smithereens. 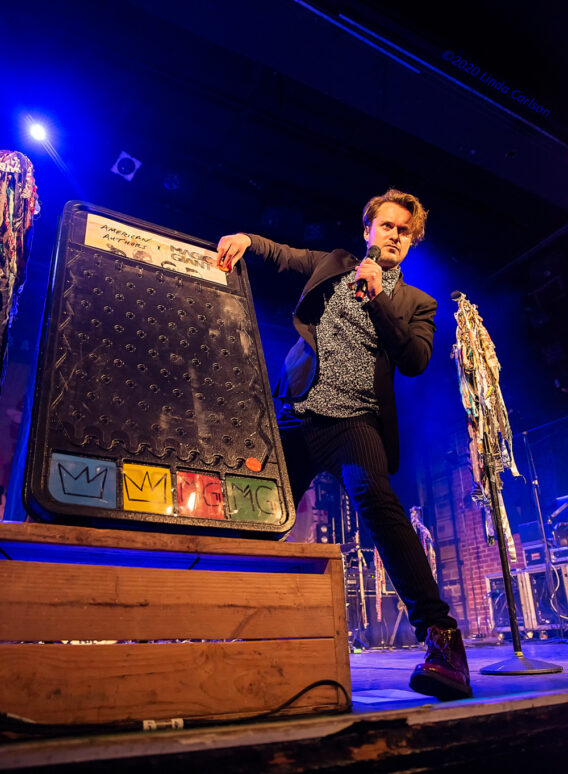 First, there was no certainty over which band would perform first.  That was decided by chance, using a plinko board…you know, the kind where nails are set in a vertical board and a disk (or ball) is dropped at the top, and it bounces its way to the bottom of the board unpredictably.  In this case, this board was used to select the first band to perform.  A disk was dropped at the top of the board in dramatic fashion, and the crowd watched wide-eyed as the disk bobbed and weaved to the bottom of the board in random fashion, into either an American Authors “bucket” or a Magic Giant “bucket.”  Two out of three determined which band performed first.  On this night, it was Magic Giant.

Next, all members of both bands performed together, then Magic Giant alone, entering the crowd and singing among the fans (they do this every performance, and it is sensational).  Back and forth, the bands played individually and then together, as a Band of Brothers.

Brilliant.  Fun.  Insanely dance-worthy.  The stage was brightly lit, and the mood was upbeat and electric.  Everyone on stage was in constant motion.

The bands performed their own original music individually and together, at times covering well-known favorites like Simon & Garfunkel’s “Cecilia,” which despite being an older (yet classic!) song, was sung by the entire audience as well.  Truly, it was nothing short of magnetic.

In a more reflective and solemn tribute, the two bands performed American Authors’ “Deep Water,” introducing the song as a memory to a member of the “family” who they had recently lost.

After the show, as is customary for Magic Giant, the band came out to meet with fans (minus Zang), take pictures with fans, sign memorabilia and just chat.  There’s a warmth they have for their fans, and they share it with them after every show.

The Band of Brothers Road Show goes through February, but I hear that the two bands will reconvene soon for a second leg of touring…if so, do not miss it if they come to a city near you!!