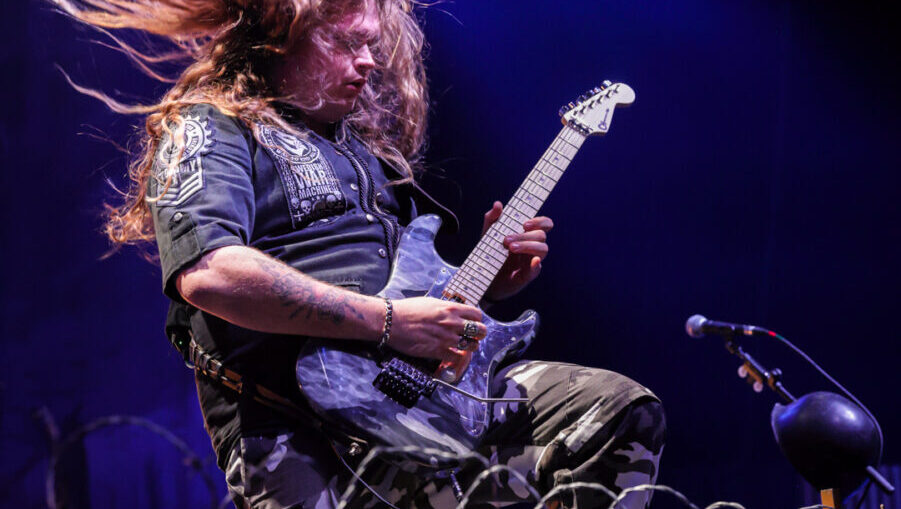 Houston, TX — When you were in school, did you ever wish that whatever subject you were studying could be made into a catchy song that would make learning said material actually fun? Maybe you experienced some sort of learning through mnemonics or salacious acronyms, but more than likely a whole song was not available. Well for us that wished to learn history in this manner, Sabaton has come to the rescue! The Swedish metal quintet (comprised of lead singer Joakim Brodén, Pär Sundström on bass, Chris Rörland & Tommy Johansson on guitars, and Hannes Van Dahl on drums) base most of their songs around wars, battles, wartime heroes/heroines, and similar topics. For those who are not familiar with medieval armor lingo, a sabaton is the foot covering in a knight’s armor, and the “S” in the band’s name is designed to look like this. This band has made such a name for themselves in this aspect that they even create videos specifically to explain each song and what significant events or persons inspired it. 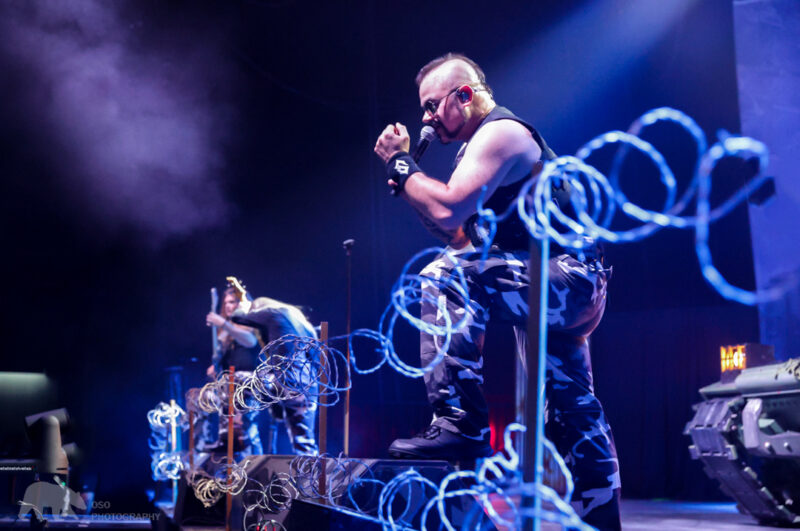 On the night of Saturday October 1st, Sabaton greeted the crowd with their distinctive brand of metal at Houston’s Bayou Music Center on their “Tour to End All Tours” tour. This allowed the band to take advantage of the bigger-sized stage to set up their familiar wartime atmosphere, complete with a mock tank with machine guns where the drummer sits, sandbags, camo netting, barbed wire, and microphone stands made up of rifles and M1 helmets. After the opening band Epica finished their set, spontaneous chants of “Sabaton! Sabaton! Sabaton!” were heard liberally while the techs were getting things prepared. 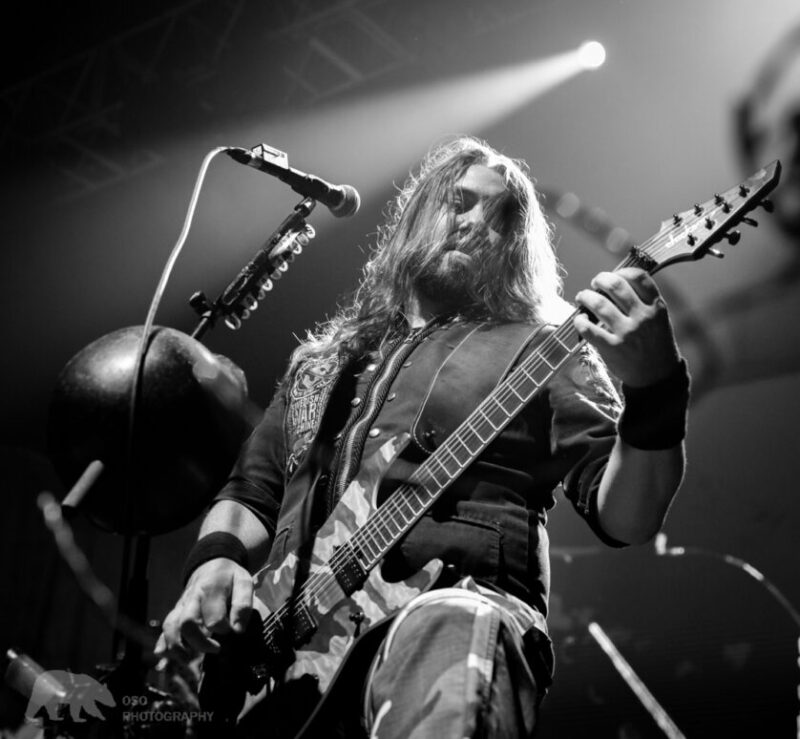 When the lights went out, a short introduction was played on the big screen onstage detailing the importance of the Doughboys (American troops) in World War I, amidst cheers of “USA! USA! USA!” from the crowd. Sabaton then began their onslaught with “Ghost Division,” a sonic punch to your face that talks about Rommel’s 7th Panzer Division from World War II. The setlist continued with the same furious energy, continuing to “Attack of the Dead Men” with Brodén’s baritone voice singing through a WWI-era gas mask while sporting a full-on German uniform with a mock poison gas shooter. Throughout the evening the band members would joke with each other between songs, throwing light-hearted insults that were often responded with a middle finger, demonstrating that even though Sabaton plays heavy metal and talks about heavy topics, they are also human, showing a jovial and playful side too. To illustrate this, they even introduced “Soldier of Heaven” as “Dancing Queen” from their compatriots ABBA. During “Carolus Rex” Sabaton donned 17th century overcoats, and Swedish flags were produced in the crowd, surprising Brodén and asking the fans if they were real Swedes or just “IKEA Swedes.” Afterwards “Gott Mit Uns” was sung in Swedish after polling the crowd what their preferred language was for the song. 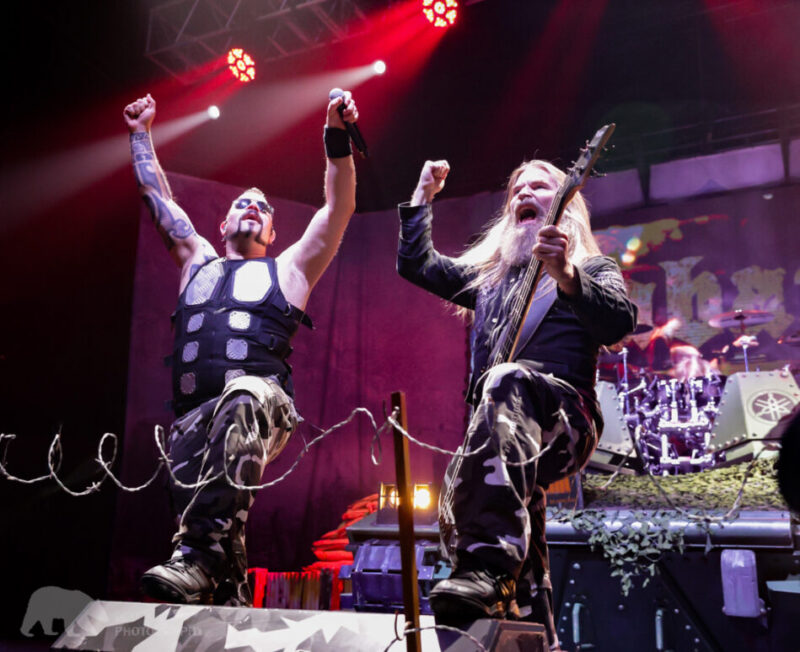 Prior to the last song before the encore, the band reflected how they visited the dry-docked Battleship Texas in Galveston on a private tour, and noted how they should come to Houston more often (their last show in town was way back in 2017). Then when “Christmas Truce” began, Brodén surprised everyone with his piano playing skills on this power ballad, with the stage lights set on red and green to add to the mood. During the encore, many more chants were heard, alternating between “Sabaton! Sabaton!” and “USA! USA!” (amazing how talking about wars stirs up patriotism). Then the encore began with “Primo Victoria” followed by “Swedish Pagans,” to then move into the first verse of AC/DC’s “Highway to Hell” (sung by Johansson) as an introduction to the closer of the night, “To Hell and Back.” 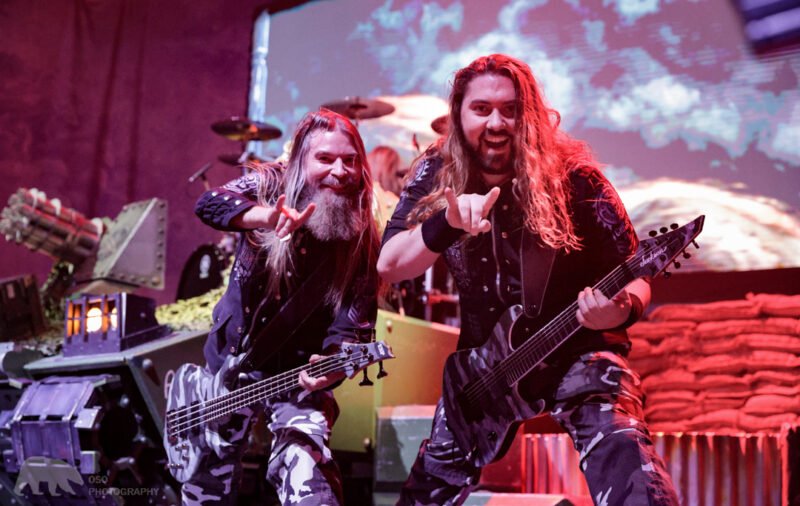 During this whopping 17-song setlist Sabaton took a stroll down memory lane by incorporating songs from the majority of their albums, with more emphasis given to their latest release, 2022’s The War to End All Wars, all the way through to their debut studio album Primo Victoria (2005). In the almost 2-hour concert Sabaton interacted with the crowd and amongst themselves, knowing how to maintain everyone engaged. Not to mention the potent metal chords, double bass pedaling, and growling low end, adding the cinematic war-inspired visuals in the background only made things sweeter. It is a shame it took 5 years for Sabaton to return to the Bayou city, but after this night maybe they will decide to add Houston to their regular touring cities. Before the last song, Brodén gifted his aviator sunglasses to an 8-year old fan in the front row, and stated “heavy metal is for everyone”- and the band to bring heavy metal to the masses is Sabaton. 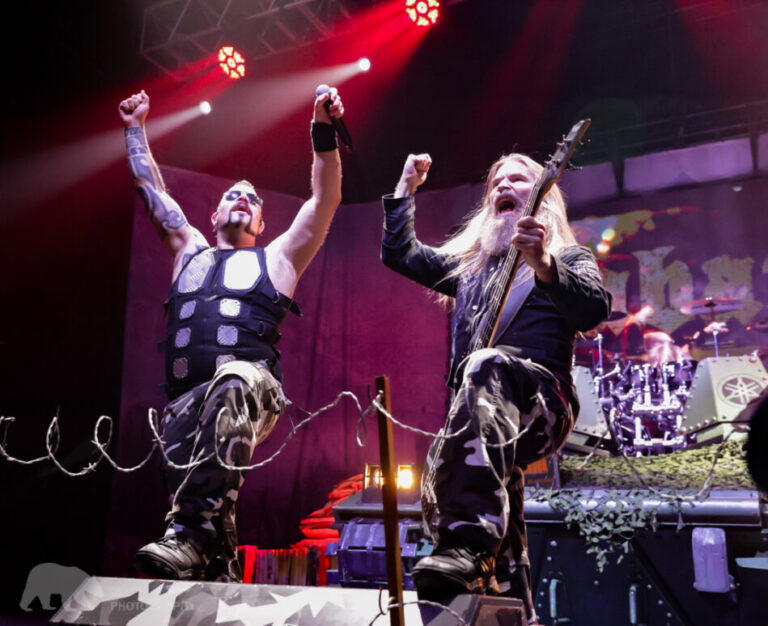 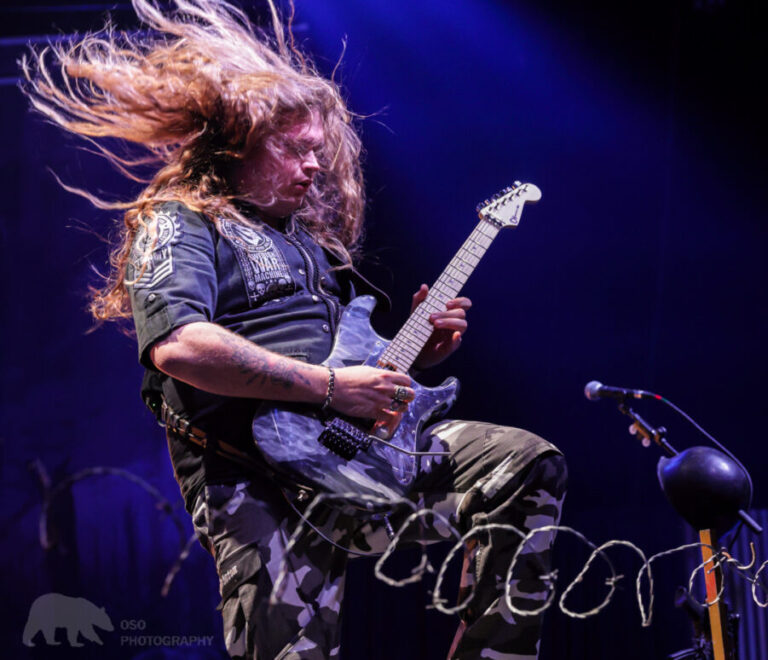 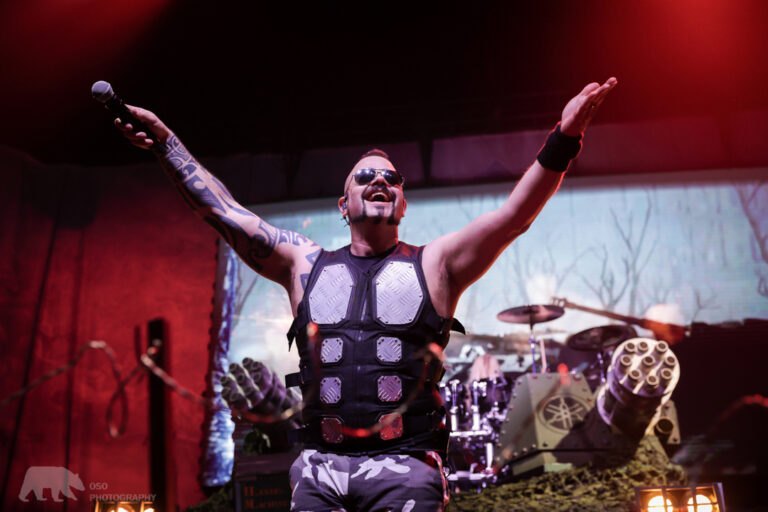 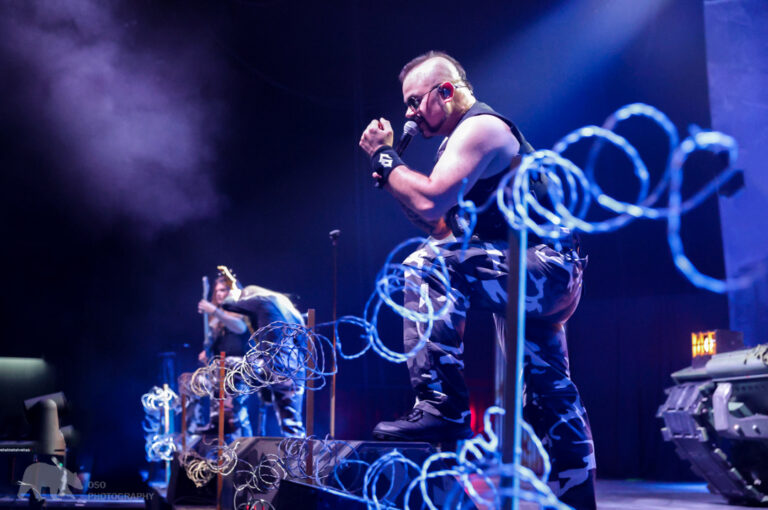 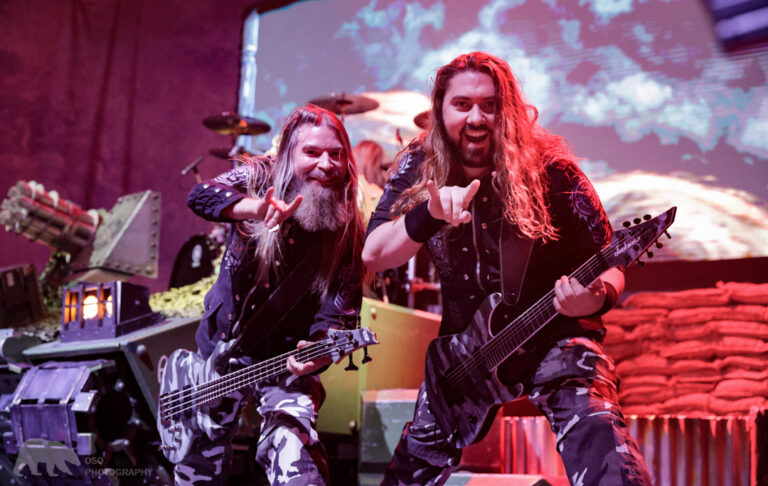 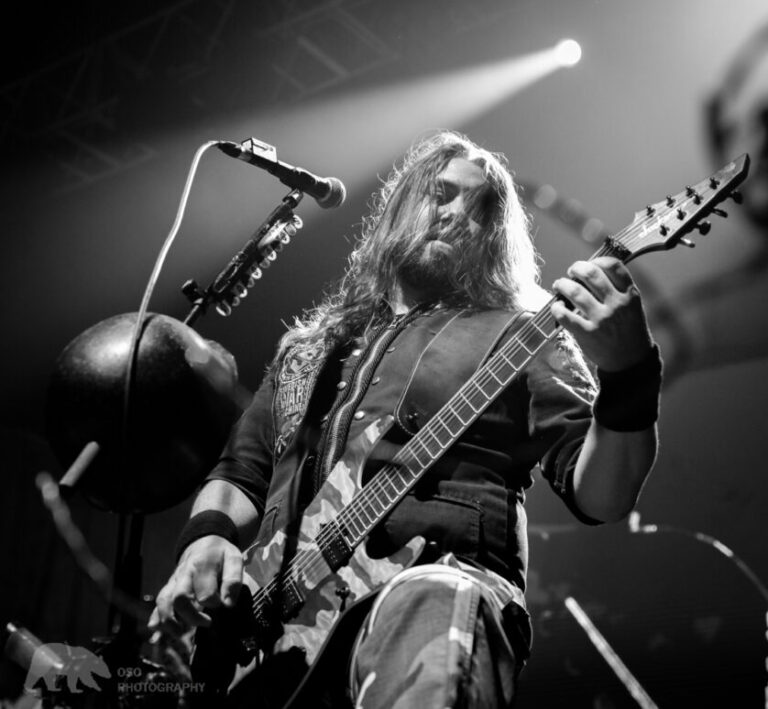 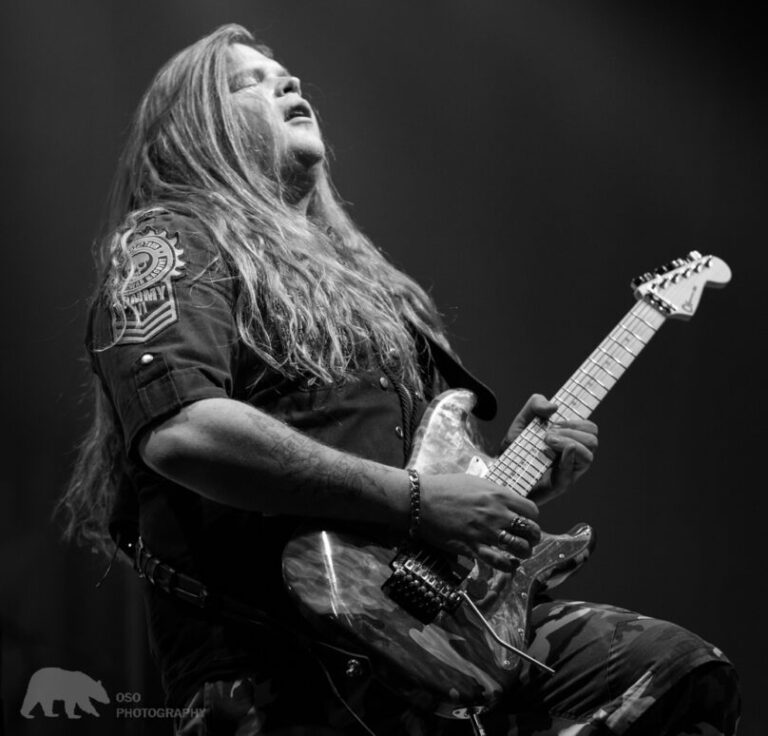 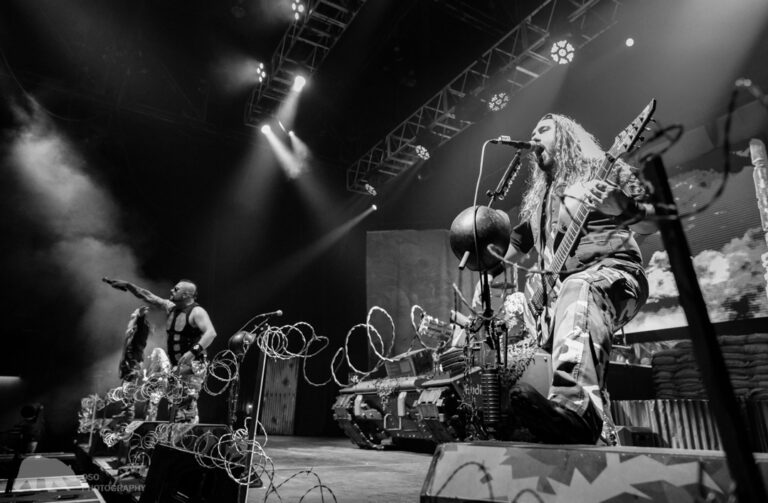 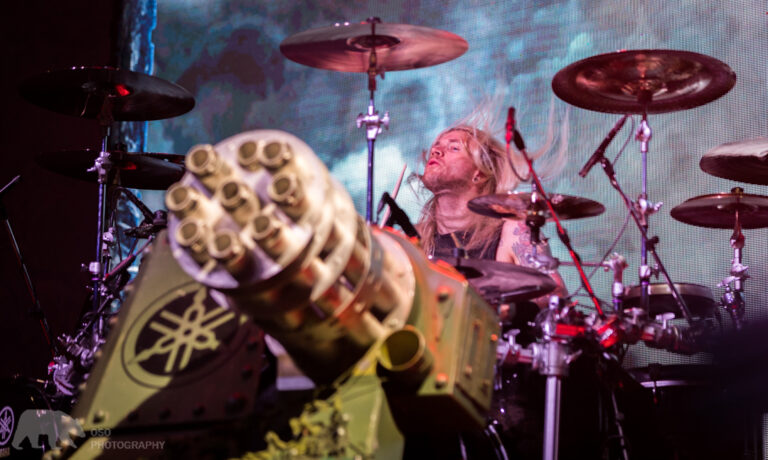