Photos and Article by: Steven Principato

Returning once again to my distant but preferred den of unholy metal ritual on this sold out Sunday night among the blackend and covenesque cavern of depravity, I had elected to indulge in a bygone obsession of my youth, that being headliner EYEHATEGOD, while at the same time, feast upon the new blood of their equally inspired youthful disciples of sludge metal.

Courageously kicking-off the night were Brooklyn’s own Chain Gang Grave. Their initial sonic assault commenced as the high energy front man leaped from the stage, bringing with him a personal face full of screams and spit to a number of lucky concert-goers, myself included. At that point, it had dawned on me as to a legendary and specific album in which none of these youths were even yet living to witness. Under this impressively Black Flag inspired Rollins-channeling “My War” (Side 2) assault on our collective senses, Chain Gang Graves won the respect of both a curious  group of onlookers and every other band in tonight’s lineup alike. 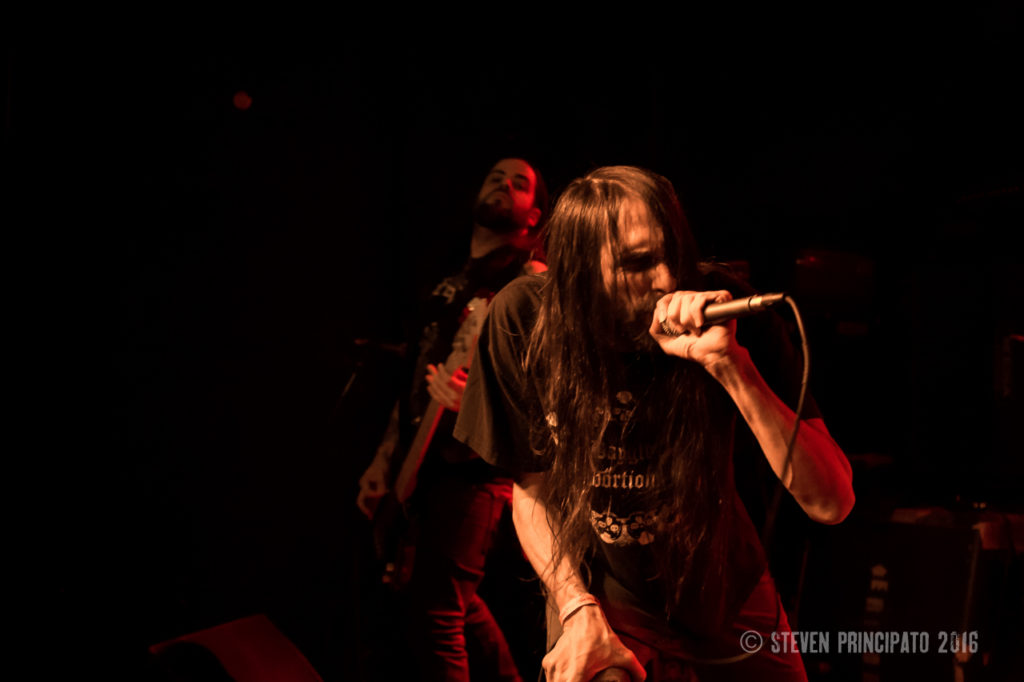 With such a difficult act to follow, Strong Island’s Deathcycle had their work cut out for them. Taking advantage of a albeit fairly vacant floor, save for a few curious souls, vocalist/wild-man Ron Grimaldi fulfilled his obligation to bring his personal war less than one inch from the faces of many an enthusiastic onlooker sparing only myself, perhaps Ron goes easy on the press. Despite Ron’s preference to deliver his revolutionary manifesto while sprawled about the floor of the venue, Deathcycle bestowed upon the crowd a brand of legitimate grind-core of Napalm Death pedigree that few bands these days have the balls or knowledge to even grasp. I’m keeping my eye on these guys. Get the 7 inch. 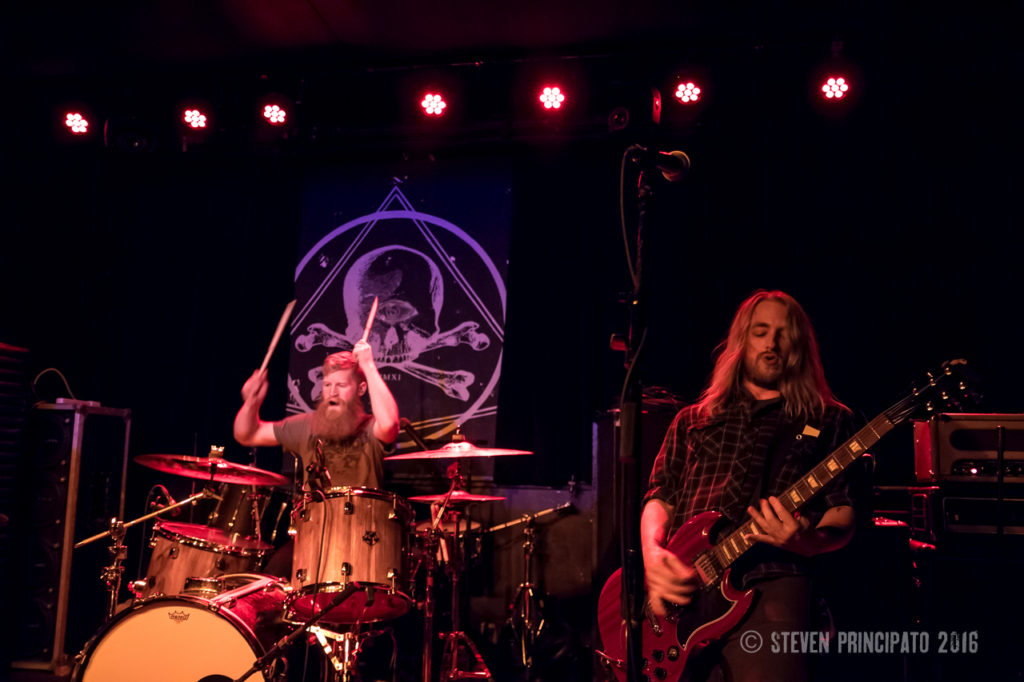 Partially cutting back on the violations of personal space, Philadelphia’s Fight Amp took a more traditional approach to their performance. This multi-vocal power trio with an extremely persistent case of Melvin-itis, more of a advantageous mutation than a fatal affliction among those who revere the all sacred roots of likely every band in the lineup tonight. With heavy emphasis on the group’s crushing soundscape, generated from the stunningly virtuous rhythmic terror at the hands of a highly skilled bearded gentleman of the skins named Dan Smith. Finishing up a tour with EYEHATEGOD, Fight Amp proved a worthy opener to an act of such caliber and long enduring existence. 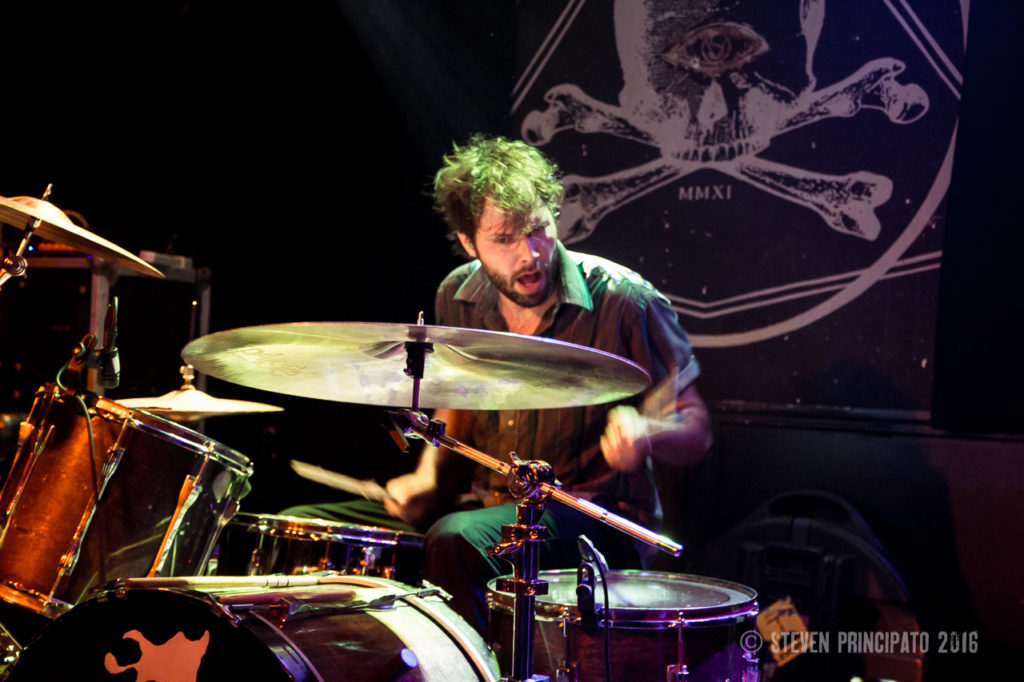 Headlining the black halls of malevolence and unspeakable acts, now teeming wall to wall with a rather motley assortment of Metal-heads, Punks, Hipsters, and Music Geeks, EYEHATEGOD tore into the ravenous and sweating crowd of musical diversity with a merciless wall of slow crushing pain and suffering. Rarely ever exceeding 90 beats per minute at any point of a nearly 30 year catalog, founding guitarist Jimmy Bower’s (Down, EYEHATEGOD) tuned down, doom inspired riffs remain a filth encrusted standard in grooves to anyone who has ever succumbed to the sludge of the NOLA scene. Guided by the tormented shrills of agony, emanating from the artistically deranged mind of Mike Williams, straight into our bleeding ears, finally forever burned in our depravity-fiending minds as disturbing visuals to compliment his distopian visions of the New Orleans experience, living in stark contradiction to that of a typical tourist travel brochure. As the groves rolled on,  One particular member had been forging together this sonic anarchy of crushing doom, showing no signs letting up. Drummer Aaron Hill had successfully finalized tonight’s unbroken streak of amazing drumming. Skillfully providing a cadence to this morbid soundtrack to a disturbing narrative that is EYEHATEGOD’s 20 plus song set list, Hill’s floor-tom heavy beats were effortlessly elevated from the murky depths of darkness, dominated by his fellow band-mates. Keeping the tradition of brutally slow painful Sabbath and Melvin-y grooves, occasionally flirting with hardcore/punk tempo blasts in an innocent attempt to justify a little playful bloodshed, EYEHATEGOD reigns above all as the first and last word in Down to earth, motherfuckin’, post-amplification blues, as the back of my still worn NSFW revolution/revelation shirt states. Being from the dirty south hasn’t killed these guys yet.

As I said farewell once again to my favorite shadowy cavern of covenesque corruption, stumbling over the broken and bloody survivors of tonight’s battle. Proceeding to carefully navigate my way past a small army of inebriated undead, I made my way to the streets just as an ambulance drove up to evacuate the expected casualties of a minor post show scuffle. As I once again walked the deserted streets of Greenpoint, preparing to endure my two plus hours of Infrequent Sunday night subway service, my faith was restored in a relentless music scene that has always remained true. Despite the current state of live metal music on a greater scale, tonight’s line up at Saint Vitus proved once again that there will always be a place for honest musicians to simply plug in, turn up, and tell the world to fuck off for a night.