Louisville, KY –A truncated festival has nothing to do with elephants. It has everything to do with rain, flooding, and a full day of music… canceled. This year’s second Bourbon and Beyond Music and Food Festival was a little less music, but plenty of Kentucky’s favorite brown beverage. Three straight days of rain cut short the two day festival when the city’s mayor wisely decided that Champions Park wasn’t safe enough for Sunday’s 50,000 or so ticket holders. Headliners Sting and Robert Plant headed for drier weather as folks began looking for refund options. Ahhh…but day one!

Three stages cooked all day with fine music, the Barrel and the Oak Stages featuring the artists with a big draw, and the Bluegrass Stage providing top tier pickers and singers. If you’ve never seen Michael Cleveland play the fiddle you have no idea how infectious modern bluegrass can be. He’s the kind of prodigy who was asked to sit in with bluegrass legend Bill Monroe at the age nine. The food and drink? Last year’s comestibles were sheer gourmet immersion and this year’s, unbelievably, were one step above. Pretzels to prime beef were only limited by your budget. Every manner of food, vegetarian, barbecue, ceviche, greek, mexican, plus the obligatory street food, made choices difficult. Award winning Iron Chefs and James Beard chefs added a certain cache to this year’s food feast. 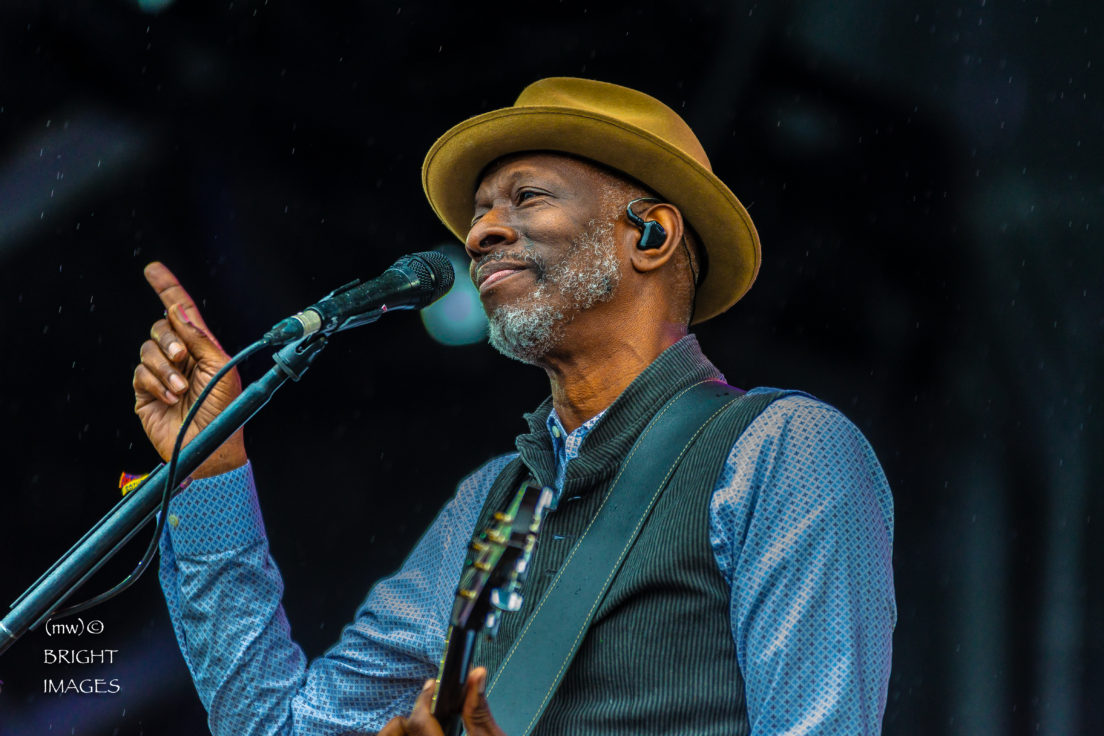 Keb’ Mo warms up like soup that’s just starting to bubble. His voice cut through the thick gray sky, his band, hot but smooth, rolling through a set of original blues. The forecast breaks in Saturday’s rain failed to materialize, and by late afternoon most of the day’s performers had decided to go shoeless to keep from slipping and sliding across the stage. The muddy skies didn’t tarnish a barefoot Sheryl Crow’s shiny perspective.  When she asked the damp throng if they wanted to travel back sixteen years to, “Soak up the Sun,” it wasn’t a tough choice to stand up and give in.

A gray-suited shoeless David Byrne slipped quietly onto an unlit stage accompanied by the soft multi-layered electronic opening of, “Here,” the introductory track to his new-ish album, American Utopia. Always theatrical, he seated himself at a desk and locked his gaze on a lifelike pink human brain that he held in one hand, “Here is a region, that is seldom used…,” 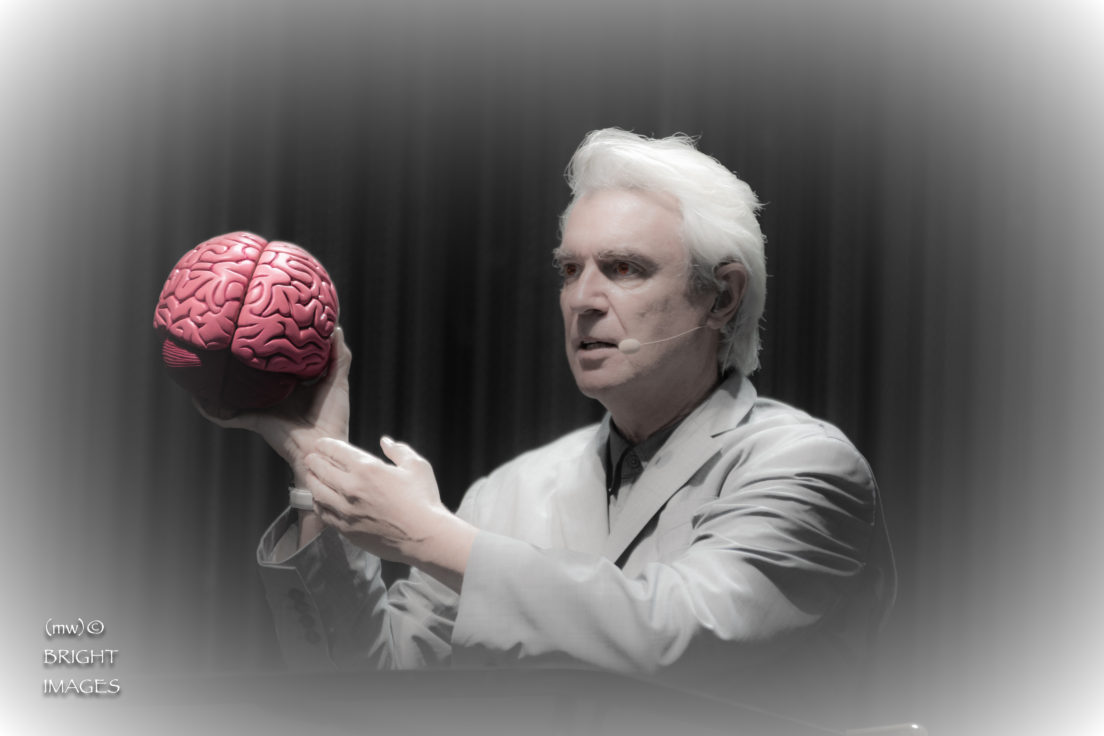 If you were in line at a food or beverage booth, you would have thought someone was suddenly throwing $100 bills from the stage. No, instead the deafening roar began when Byrne began playing the opening guitar notes to Talking Heads, “I Zimbra.” No less than eight percussionists had joined him on the stage for what would be a string of the best known songs from a band that hadn’t been active for 27 years. “This Must Be the Place,” “Once in a Lifetime,” and “Blind,” were included in the time trip. When the syncopated introduction to “Slippery People” began, the big crowd bubbled up into on large swaying mass, pitching side to side. It was as if Byrne was adding a personal touch to the afternoon by acknowledging the deepening mud and its stalwarts. His set would be the best moment of Saturday’s lineup. 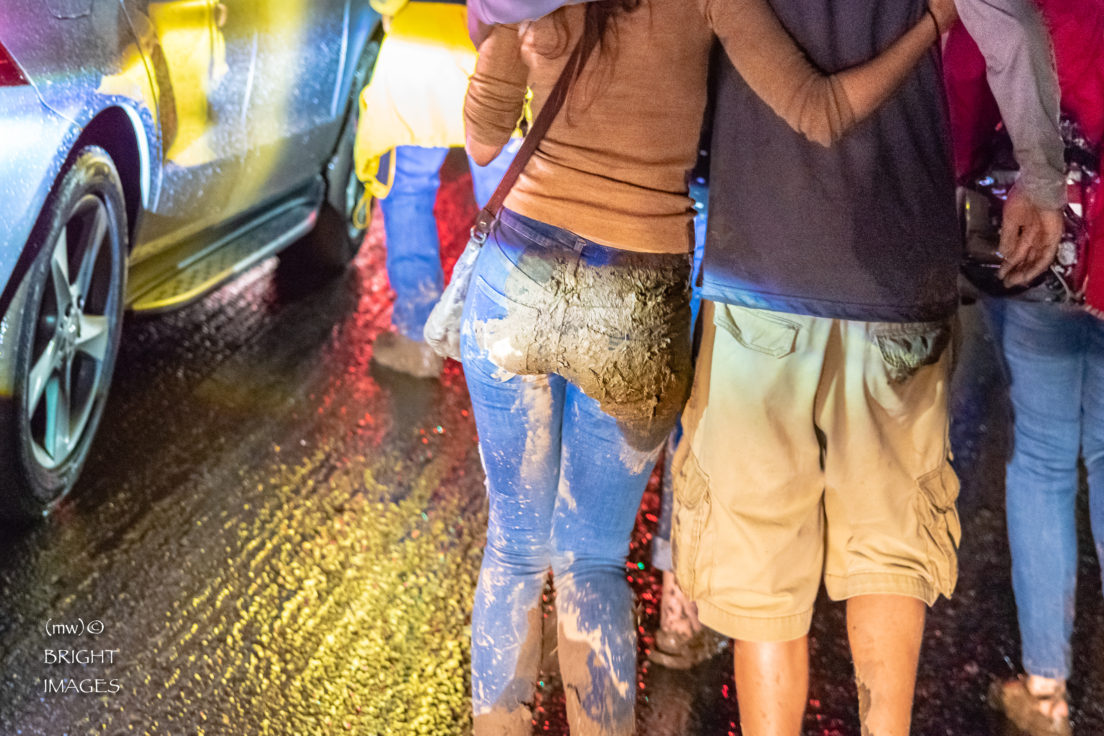 By the time John Mayer emerged from the dark onto a half lit stage, there was no ground, no grass. There were no visible pathways, just one huge muddy puddle. Dylan’s, “All Along the Watchtower,” and the Dead’s, “Fire on the Mountain,” punctuated a shortened festival rollout of Mayer’s hits and album cuts. Hendrix’s, “Axis Bold as Love,” an unexpected treat, demonstrated his blistering guitar-craft, a talent that some believe is too often lost in his pop sensibilities.

A full day of uncompromising music, great food, and fine bourbon whiskey would turn out to be a rare event. It was not only because there would not be a day two of the weekend festival. One master distiller put it this way. “Unfortunately, folks here will have an opportunity to taste some of the best, and rarest bourbons in the world, and they will fall in love. When they go back home and they can’t find it on the shelf, they’ll be awfully disappointed.”